“THE VISIBILITY OF THE CHURCH” Archbishop Lefebvre Magazine Fideliter, No. 66 November-December 1988 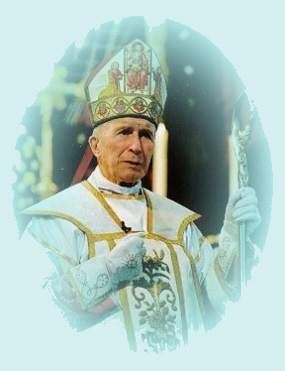 “THE VISIBILITY OF THE CHURCH”
Archbishop Lefebvre’s Conference
To the priests at Econe, September 9, 1988
(Magazine Fideliter, No. 66 November-December 1988)
(Translated from the French)

Where is the visible church? The visible church is recognized by the marks that have always been given to visibility: One, Holy Catholic and Apostolic. I ask: Where are the true marks of the Church? Are they more evident in the official Church (this is not the visible Church, it is the official church) or in us, in what we represent, what we are? Clearly we are the ones who preserve the Unity of the Faith, which disappeared from the official Church. One bishop believes in this, the other not, faith is different, their catechisms contain abominable heresies. Where is the unity of the Faith in Rome?

Where is the unity of Faith in the world? It is in us, we who preserve it. The unity of the Faith held in the whole world is the Catholicity. Now this unity of Faith around the world no longer exists, practically, there is no more Catholicity. There will soon be as many Catholic Churches as bishops and dioceses. Everyone has their way of seeing, thinking, preaching, making his catechism. There is no Catholicity anymore.

Where is Apostolicity? They broke with the past. They do not want to know any more of the past before Vatican II.

See the Pope’s Motu Proprio [Ecclesia Dei Adflicta of 1988] that condemns us:“The living Tradition, it is Vatican II. It is not necessary to refer to the era before Vatican II, that is meaningless.” The Church carries the Tradition with her from century to century. What happened, happened, it disappeared. The whole Tradition is in the Church of today. Which is this Tradition? What is it linked to? How is it linked with the past? That is what allows them to say the opposite of what was said before, intending, at the same time, to keep Tradition by themselves.

This is what the Pope [John Paul II] asks of us: “To submit to the living tradition.” We would have a “wrong” concept of Tradition, because for them, Tradition is “living” and therefore “evolutionary.”

But this is a modernist error: The holy Pope Pius X in his encyclical Pascendi condemns these terms of “living tradition,” “living Church,” “living faith,”etc. In the sense that the modernists understand it, that is, of the evolution that depends on historical circumstances. The truth of Revelation, the explanation of Revelation, depends on historical circumstances.

Then the Holiness: We are not going to do compliments or praises for ourselves. If we don’t want to consider ourselves, let’s consider the others and let’s consider the fruits of our apostolate, the fruits of the vocations, of our religious and the fruits of Catholic families. The good and holy Catholic families germinate, thanks to your apostolate. It is a fact, nobody denies it. Even progressive visitors of Rome stated the good quality of our work. Mgr. Perl said to the Sisters of Saint Pre and Fanjeaux that the reconstruction of the Church will come from bases like these. It is not, regardless, a small compliment.

It is completely false to consider ourselves as if we were not part of the visible Church. That’s incredible! It is the official Church that rejects us, but not we who reject the Church, far from it. On the contrary, we are always united to the Roman Church and even to the Pope of course, the successor of Peter. I think we must have this conviction to avoid falling into the errors that are now spreading.

Therefore, is it necessary to leave the official Church? To some extent, yes, obviously.

The whole book of Mr Madiran, “The Heresy of the Twentieth Century,” is the story of the heresy of the bishops.

It is therefore necessary to leave the bishops’ environment, if you do not want to lose the soul.

But that’s not enough, as it is in Rome where the heresy sits. If the bishops are heretics (even without taking this term in its canonical sense and consequences) it is not without the influence of Rome.

If we move away from these people, it is quite the same way as people with AIDS. There is no desire to catch it. Now, they have spiritual AIDS, infectious diseases. If you want to save your health, you must not go with them.

Yes! Liberalism and Modernism were introduced into the Church by means of the Council. The revolutionary ideas and the Revolution that were in society, then penetrated inside the Church.

Cardinal Ratzinger [now Benedict XVI], on the other hand, does not hide it: They adopted the ideas, not of the Church, but those of the world and they considered it their duty to make them enter inside the Church. But the authorities did not change their ideas one iota about the Council, Liberalism and Modernism. They are anti-Tradition, Tradition as it should be understood, and as the Church understands it. That does not fit their conception. Their’s is an “evolving” concept. They are therefore against this fixed Tradition, in which we stand.

We believe that everything the catechism teaches us comes from Our Lord and the Apostles, and that there is nothing to change. For them, no; everything is evolving and evolved with Vatican II. The current term of “evolution” comes from Vatican II. This is the one reason why we cannot link with Rome.

Whatever happens, we must continue as we have done, and the Good Lord shows us that following this route, we fulfill our duty.

I realized that the desire of Rome is to impose their ideas and their way of seeing things. Cardinal Ratzinger always told me, “But Monsignor, there is only one Church, it is not necessary to make a parallel church.”Which is this Church for him? The Conciliar Church, this is clear!

When he explicitly said to us: “Obviously, if this Protocol [of 1988] is granted to you, you must also accept what we do, therefore, in the Church of Saint-Nicolas-du-Chardonnet it will be necessary also to say a New Mass every Sunday…”

You see, he wanted to lead us to the Conciliar Church! This is not possible since it is clear that they want to impose these innovations on us to end the Tradition! They do not grant anything out of appreciation for the traditional Liturgy, but simply to cheat those to whom they give it and to diminish our resistance; to insert a wedge in the Traditional block to destroy it!

This is their policy, their conscious tactics! They do not make a mistake, and you know the pressures that they exert…