Fr. Daniel Couture Sermon for October 2013 On the power and importance of the Holy Rosary

On the power and importance of the Holy Rosary 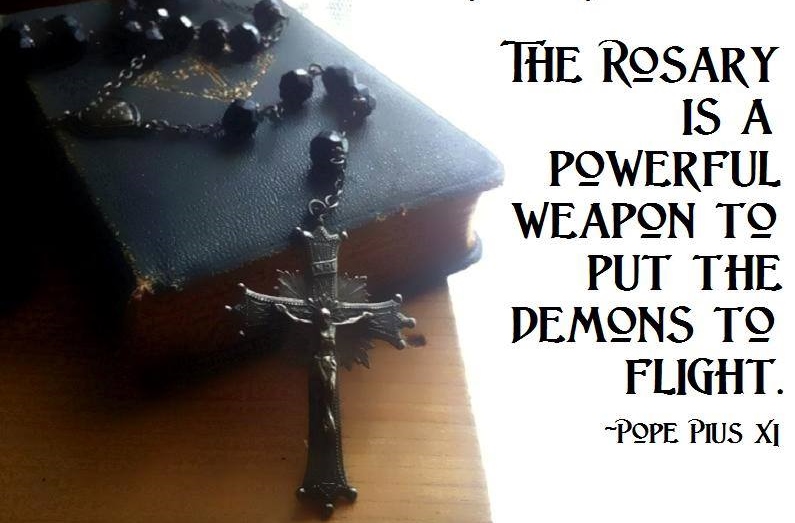 It is a great grace to be able to attend the Traditional Latin Mass once a week, or once or twice a month.  But on the other days, are you faithful to your daily rosary? It’s not enough to come to the Traditional mass in order to go to heaven.  You must do your personal part too to ask for God’s grace seven days a week, and that part is essentially prayer, specially the prayer of the Holy Rosary.  “He who prays will be saved, he who doesn’t pray will be condemned”, St Alphonsus says.

To encourage you to be faithful to your daily rosary especially during this month of October, I would like to remind you, first, of the origin and history of the Holy Rosary, and then, in a second point, why the Holy Rosary is still so important for our present day history.

First point: Origin of the Rosary

The year was 1214. St Dominic had already founded the Order of Preachers, later called, the Dominicans, and he was immediately faced with the heresy of the Albigenses which was spreading especially through the South of France, where St Dominic was. Our Lady appeared to him after he had been praying seriously and doing severe penance for many days in order to know how to fight the heretics.  She said to him:

“Dear Dominic, do you know what weapon the Most Holy Trinity wants to use to reform the world?” St Dominic replied: “O my Lady, you know it much better than I do, because, next to your Son Jesus Christ, you have always been the instrument of our salvation.” Our Lady continued: “ I want you to know that in this kind of warfare the ‘battering ram’ has always been the Angelic Psalter which is the corner stone of the New Testament.  So, if you want to reach these hardened souls and win them to God, preach my Psalter!”

We need to explain Our Lady’s words. Firstly, she calls the battle St Dominic was waging against heresy, ‘a kind of warfare’ . Indeed there has always been a deadly fight between truth and error, virtue and vice.  Among other things, the Albigenses were destroying marriage and making people live in sin, and in order to save the souls deceived by these heresies, there had to be a serious fight, a real warfare.

Then, Our Lady speaks of a ‘battering ram’, which is very symbolic too.  A battering ram is a large beam, sometimes a whole tree, handled by many men, or by a kind of a structure, that is used to open a large gate, or to make an opening in a wall.  It only works with the repetition of blows on the gate or the wall.  She compares the Rosary to a battering ram: all these Hail Mary’s knock down the power of the devil to weaken it. We can also say that they knock on the Heart of God as well to obtain the opening of the flood of graces.  “Knock and it shall be open”, Jesus said.

Thirdly, Our Lady calls the Rosary “the Angelic Psalter”.  You are familiar with the book of Psalms, mostly written by King David, in the Old Testament.  There were 150 Psalms which the monks recited every week and still do, in fact. So the word Psalter means 150. Some of the monks in the monasteries who could not read or write would replace the recitation of the 150 Psalms, by 150 Our Fathers or Hail Marys. The Ave Maria is called the Angelic Salutation. So, when Our blessed Lady uses the words “The Angelic Psalter “and “My Psalter” , she refers to the 150 Ave Maria of the full rosary.

Our Lady finally says that the Angelic Psalter “is the corner stone of the New Testament”.  The whole mystery of the Redemptive Incarnation began with the Annunciation, which opened with the Ave Maria. Our Lady’s consent to the words of the Angel Gabriel – “Behold the Handmaid of the Lord” - was a consent to the Incarnation of the Word of God, to become the Mother of God and our Mother, and also to be the Woman that would be in enmity with the serpent and crush his head.

Let us now repeat the words of Our Lady to St Dominic: “I want you to know that in this kind of warfare the ‘battering ram’ has always been the Angelic Psalter which is the corner stone of the New Testament.  So, if you want to reach these hardened souls and win them to God, preach my Psalter!”

And St Dominic did it! And thousands of heretics were converted. A few hundred years later, Louis XIII, a French king, did it also in a war against the Protestants, and in thanksgiving for the victory, he built the famous church of Our Lady of Victories, in Paris.  The feast of Our Lady of Victories is on … October 7 th ! Later still, the first Dominican Pope, St Pius V used the rosary in the crusade against the Muslim Turks who were dangerously threatening to invade Europe. And the Rosary won again. It was October 7 th , 1571. And the list of the victories of the Rosary is long and continue until our own days.

Is it surprising then that at Fatima, Our Blessed Lady urged the recitation of the rosary against the plague of communism? Whether it is against the Albigenses, the Protestants, the Muslim or the communists, “in this kind of warfare, our ‘battering ram’, the Rosary, must always be used. We have the promises of Our Lady and history on our side to prove it.

Before I come to the second point, our own contemporary history, I want to remind you of a detail in the history of Fatima. The children of Fatima understood that the popes would have a very important role to play to obtain or to delay the triumph of the Immaculate Heart. They saw something truly tragic about this, so that they were constantly adding to their sacrifices:  “for the conversion of sinners and for the Holy Father”.

Did they see that 7 popes would refuse to obey Our Lady’s request to consecrate Russia to the Immaculate Heart, and that as a consequence Russia would spread its errors, and would cause hundreds of millions of deaths?  Did they see, as Cardinal Ciappi said, he who read the Third Secret of Fatima, that “the apostasy would start from the highest summit of the Church”? That would explain certain of the words and attitudes of the children of Fatima, and also why Sr Lucy was like paralyzed when it came to write down this Third Secret, in January 1944.

Second Point: the need of the Rosary for our present history.

So many of his acts show that sadly, very sadly, he is imbued with modernism.  For example, in his first encyclical on faith, Lumen Fidei, he confuses faith and charity.  These are two different theological virtues: faith is in the intellect and has for object the truth revealed by God and proposed by the Church, while Charity is in the will and has for object God as the supreme good.  Now the Holy Father in an encyclical – but now encyclicals seem to be more for the world at large than for the bishops, like they used to be -  says this: “Faith knows in the measure that it is linked to love, in the measure where love itself carries a light”.   When you read the encyclical, you do get the message that faith is merely a religious feeling based on love.  Well, that is exactly how St Pius X described modernism.

Then, he has announced that he will canonize two of the popes of the Council: Pope John XXIII and Pope John Paul II.  For the first one, they have even dispensed from the miracle which is the sign that the person has reached heaven. For John Paul II, I encourage you to read the book: Doubts on a Beatification which was published by Angelus Press.  Pope John Paul II has a different notion of the three virtues of Faith, hope and charity. Such canonizations – if God allows them – change the very notion of holiness, which is one of the four marks of the Church, and the goal of these canonization is truly to canonize Vatican II and its errors which are destroying the Church.

I cannot speak of everything which Pope Francis has already done, such as the terrible and scandalous World Youth Days in Brazil, last August, or his recent long interview with the Jesuits, where he says that Vatican II is irrevocable.  I simply want to mention another more recent interview given on October 2, to the Italian Newspaper “Reppublica”, which is run by an openly atheist editor.

One of the first words of the pope to this editor Eugenio Scalfari was: “Proselytism is an pompous absurdity, it has no meaning”.  This means that we should not try to convert people.  This is not exactly what we read in the Gospel: “Go and preach the Gospel to every creature!”

Mr. Scalfari, the editor of the newspaper, asked the pope if there was a unique vision of what is Good, and if so, who can decide this? The pope replied: “Every human being possesses his own vision of what is good, but also of what is evil.  Our task is to encourage him to follow the way shown by what he estimates is good.” And he insisted: “And I am ready to repeat this.

Everyone has his own conception of Good and Evil, and everyone must choose and follow good and fight evil according to the idea that he has.  That would be enough to live in a better world.”

We can understand why the children of Fatima prayed and suffered so much “for the Holy Father”. And Our Lady’s words as well: “Pray the Rosary daily!”

Let me conclude with words of wisdom from the Imitation of Christ, a wisdom so important in dealing with present day history: If you see another man sin openly or commit a serious crime, do not consider yourself better, for you do not know how long you can remain in a good state. All men are frail, but you must admit that none is more frail than yourself. (I, 2)

My Dear Brethren, do say your rosary every day, as Our Heavenly Mother has urged us, pray for the Holy Father. As you can see, his mind is filled with the modern errors. Pray the rosary for him. This is the best way for us to help him. And keep yourself free from sin. Go to confession frequently. Be faithful in your duty of state.

Our Lady of the Rosary, pray for us and “for the Holy Father”!

Such words of wisdom, consolation and encouragement...may we pray frequent rosaries for our Holy Father,

that Mary Most Holy will obtain his true conversion!

What a breath of fresh air!

Thank you very much for posting this.