Supplication to Our Lady of Ransom

Supplication to Our Lady of Ransom 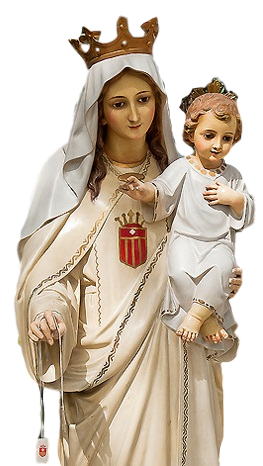 O Immaculate and wholly pure Virgin Mary, Mother of God, Queen of the world, hope of those who are in despair, thou art the joy of the Saints; thou art the peacemaker between sinners and God; thou art the advocate of the abandoned, the secure haven of those who are on the sea of the world; thou art the consolation of the world, the ransom of slaves, the comfortress of the afflicted, the salvation of the universe.
O great Queen, we take refuge in thy protection: 'We have no confidence but in thee, O most faithful Virgin.' After God thou art all our hope. We bear the name of thy servants; allow not the enemy to drag us to hell. I salute thee, O great Mediatress of peace, between men and God, Mother of Jesus our Lord, who is the love of all men and of God, to whom be honor and benediction with the Father and the Holy Ghost. Amen.

*Not part of the novena, for informational purposes only concerning Our Lady of Ransom*

The appropriateness of this beautiful title, given in 1218 to our Lady, will best be understood from a narration of the events which led to the institution of this festival in her honour, and to the foundation of a Religious Order under the same glorious appellation. In the year 1189, there was born in Languedoc a nobleman named Peter Nolasco, whose soul God filled, even in his earliest years, with a great love of virtue, and with a tender compassion for the poor. At the age of twenty-five he made a vow of chastity, and joined himself to Simon de Montfort in his crusade against the Albigensian heretics. After the defeat of these latter, James I., King of Aragon, appointed him tutor to his son, whom he accompanied into Spain. At that time the Moors had seized upon certain parts of the Peninsula, and the sight of the misery to which Christians were reduced in slavery under these cruel task-masters, filled the heart of Peter with a desire to lighten their heavy burthen.

While revolving in his mind how his good-will might best be carried into effect, our Lady appeared to him, in a vision during the night, and intimated to him that it would be very pleasing to her Divine Son, if an Order of religious men were established for the redemption of captives. On the following day, Peter went to his confessor, St. Raymund de Pennafort, to tell him of the vision with which he had been favoured; but to his great surprise, he found the Saint already acquainted with the fact, for the same heavenly visitant had graciously signified her wish to him also. Moreover, she had revealed to the King that this project had the blessing of her Divine Son. These three, therefore, at once determined to establish a Religious Order for the purpose of redeeming captive Christians from the tyranny of the Moors.

In addition to the usual vows of religion, they by a fourth vow bound themselves to remain, if necessary, in captivity till ransom could be procured for the liberation of the slaves. Pope Honorius III. by word of mouth approved of this Brotherhood, and Pope Gregory IX. in 1235, solemnly confirmed and established it as a Religious Order. He gave its members the Rule of St. Augustine to guide them to perfection, and a white habit to remind them of the purity to which they were to aspire under the patronage of the most pure Virgin. Thus, under the auspices of our Lady of Redemption, these holy men set about their heroic work, and while rescuing the bodies of Christians from the slavery of the Moors, they did their utmost to free their souls from the slavery of the devil.

You may judge from this indication of Mary's love for the Christian people, and from her eagerness to free their bodies from the tyranny of cruel and infidel masters, what must be her zeal to free them from the still more cruel slavery of Satan. They are her children, committed to her care by Jesus Christ, loved by Him with unutterable tenderness, and purchased at the price of His bitter Passion. In her eyes they are, so to speak, invested with the personality of Jesus Christ. They are, in a measure, unto her what He was, and therefore the love which she bore to Him is transferred to them. Judge therefore of her sorrow, when she beholds them in the jaws of the wolves of hell. When men lose their liberty, and fall beneath the yoke of a foreign power, it is their bodies only that are in chains; their minds, their souls are free. No dungeon can darken their light, no manacles, no fetters can bind down their thoughts or their aspirations. The tyrant may threaten, may kill; but he cannot compel the will to bend. If, as a last resource, he strike with the sword, one sharp pang will forever free the poor wretched prisoner from his clutches.

It is far otherwise with the tyranny of the devil. He enslaves the souls of men. With a tempting bait, he first allures them into his nets, and having once entrapped them, he holds them fast. Very speedily sin enfeebles the will, darkens the intellect, and fills the soul with disgust for heavenly things. Hence, when from time to time grace urges it to rise again, it may do so for a season, feeling all the while how terribly strong is the hold which the devil has upon its powers. It struggles against him for a while, and then falls back. Thus the evil one, by his tyranny, succeeds in destroying not only the bodies of his slaves, but their immortal souls. Therefore, Jesus bids us not to fear those who can destroy only the body: 'I will tell you,' He adds, 'whom you shall fear. Fear Him who can destroy the soul.'

Our dear Mother is, therefore, full of tender solicitude for her children. When she beholds them in the power of this cruel enemy of her Son, she lifts up her pure and spotless hands before the throne of God, and continually pleads with Him for them, that the ransom of the precious blood may be applied to them, that their chains may be broken, and that they themselves may be restored to liberty.

Knowing, therefore, the great love of your holy Mother Mary for poor sinners, you must strive to the utmost of your ability to second her desire for the redemption of souls from the slavery of sin. In order that your zeal may be according to knowledge, you must begin with yourself; for otherwise you will present to the eyes both of Angels and of men the ridiculous spectacle of one who saves others, but destroys himself; who points out to others the way to heaven, but will not himself walk in it.

Do not be so foolish. Let not sin dwell in your soul; suffer it not to enslave your heart. Be not of the number of those fools who fancy that they can for a time walk with the devil, and then easily withdraw from his fellowship; who imagine that they may float with the stream, and then return in safety to the pleasant shore. Those who think thus, little know the tenacious grasp with which sin holds a man down in its iron fetters, nor the velocity with which the stream of iniquity whirls him beyond the reach of help or the hope of return. If you are wise, learn this in time. Withdraw your feet at once and forever from the fetters of sin, and turn your back resolutely upon the glitter of the tempting stream. After thus manifesting zeal for your own soul, you may venture to be zealous for the souls of others; for he who is in safety may strive to help others, and he who is not sick may with propriety try to heal those who are.