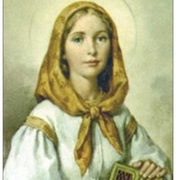 THE SAINT DYMPHNA PRAYER GROUP HAS BEEN SET UP FOR THOSE MEMBERS WHO WISH TO OFFER A PRAYER TO SAINT DYMPHNA FOR THOSE SOULS SUFFERING WITH MENTAL ILLNESS OR SPIRITUAL DISORDERS WHO HAVE EITHER ASKED FOR PRAYERS FOR THEMSELVES, OR FOR WHOM OTHERS HAVE REQUESTED PRAYERS.

Saint Dymphna was the Daughter of a pagan Irish chieftain named Damon, and a beautiful devoted Christian woman whose name has not come down to us. Her mother died when Dymphna was a teenager. Her father searched the Western world for a woman to replace his wife, but none could. Returning home, he saw that his daughter was as beautiful as her mother, and maddened by grief, he made advances on her. She fought him off, then fled to Belgium with Saint Gerebernus, an elderly priest and family friend.

Dymphna’s father searched for them, and his search led to Belgium. There an innkeeper refused to accept his money, knowing it was difficult to exchange. This told Damon that his daughter was close – it would be unusual for a village innkeeper to know a lot about foreign currency, and his knowledge indicated that had recently seen it. The king concentrated his search in the area. When he found them in Gheel, he beheaded Gerebernus, and demanded that Dymphna surrender to him. She refused, and he killed her in a rage.

The site where she died is known for its miraculous healings of the insane and possessed. There is now a well-known institution on the site, and her relics are reported to cure insanity and epilepsy.