A GLIMPSE OF PURGATORY

A GLIMPSE OF PURGATORY 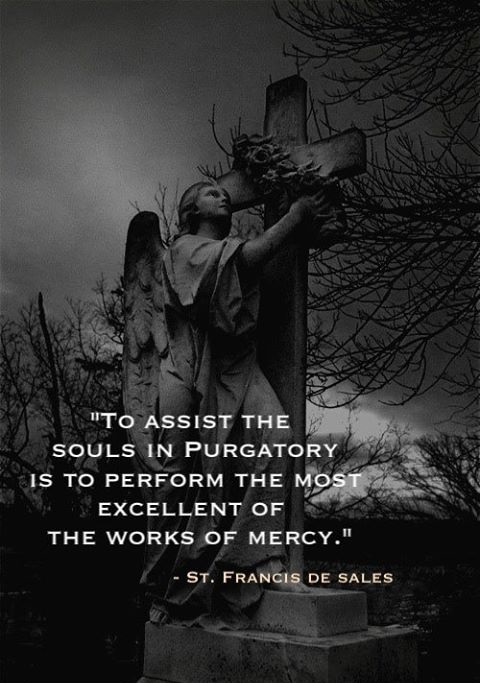 To get an idea of how Purgatory is arranged, we can get a good glimpse of it from a nun from France who had died on February 22, 1871 at the age of 36, and 2-1/2 years later (in November 1873) she began appearing from Purgatory to a fellow nun in her convent, named Sister M. de L.C (name kept anonymous in the manuscript to protect the nuns identity, as the manuscript was published while the nun was still living) as related in the booklet “An Unpublished Manuscript on Purgatory” published by The Reparation Society of the Immaculate Heart of Mary, Inc., 2002:

“I can tell you about the different degrees of Purgatory because I have passed through them. In the great Purgatory there are several stages. In the lowest and most painful, it is like a temporary hell, and here there are the sinners who have committed terrible crimes during life and whose death surprised them in that state. It was almost a miracle that they were saved, and often by the prayers of holy parents or other pious persons. Sometimes they did not even have time to confess their sins and the world thought them lost, but God, whose mercy is infinite, gave them at the moment of death the contrition necessary for their salvation on account of one or more good actions which they performed during life. For such souls, Purgatory is terrible. It is a real hell with this difference, that in hell they curse God, whereas we bless Him and thank Him for having saved us.

Next to these come the souls, who though they did not commit great crimes like the others, were indifferent to God. They did not fulfill their Easter duties and were also converted at the point of death. Many were unable to receive Holy Communion. They are in Purgatory for the long years of indifference. They suffer unheard of pains and are abandoned either without prayers or if they are said for them, they are not allowed to profit by them.

In the second Purgatory are the souls of those who died with venial sins not fully expiated before death, or with mortal sins that have been forgiven but for which they have not made entire satisfaction to the Divine Justice. In this part of Purgatory, there are also different degrees according to the merits of each soul.

Thus the Purgatory of the consecrated souls or of those who have received more abundant graces, is longer and far more painful than that of ordinary people of the world.

Lastly, there is the Purgatory of desire which is called the Threshold. Very few escape this. To avoid it altogether, one must ardently desire Heaven and the vision of God. That is rare, rarer than people think, because even pious people are afraid of God and have not, therefore, a sufficiently strong desire of going to Heaven.

This Purgatory has its very painful martyrdom like the others. The deprivation of the sight of our loving Jesus adds to the intense suffering.”

Very enlightening - thank you for sharing this.