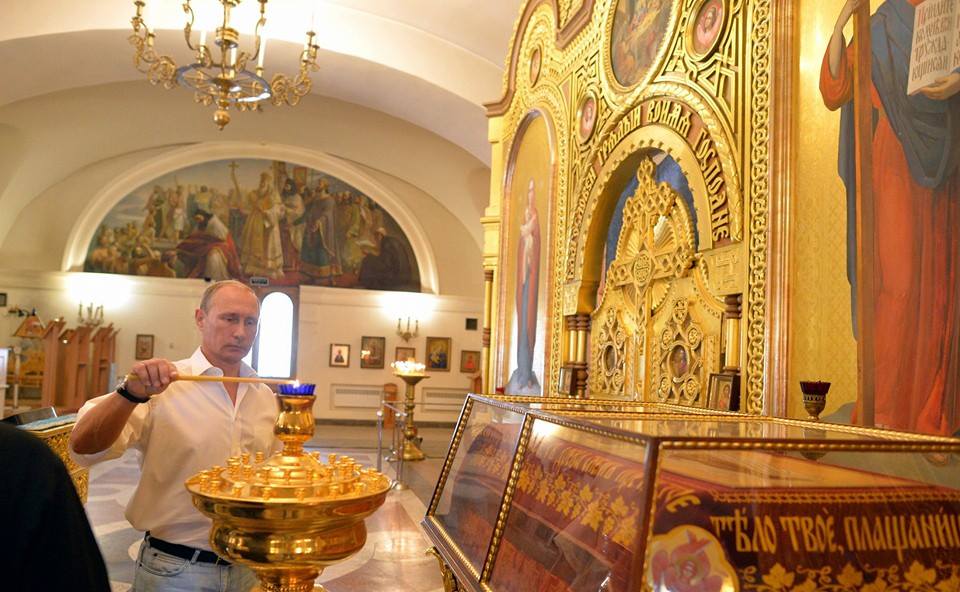 The general political direction of the [Western political] elite bears, without doubt, an anti-Christian and anti-religious character,” the patriarch said in comments aired on state-controlled television.
“We have been through an epoch of atheism, and we know what it is to live without God,” Patriarch Kirill said. “We want to shout to the whole world, ‘Stop!’”

Full article at the Washington Times

Russian President Vladimir Putin condemned the West, including the United States, for eschewing Christian values and opting instead for a “path to degradation.”

In his State of the Nation speech last month, Putin asserted that, “Many Euro-Atlantic countries have moved away from their roots, including Christian values… Policies are being pursued that place on the same level a multi-child family and a same-sex partnership, a faith in God and a belief in Satan.” Russia has adopted new laws that ban homosexual propaganda and criminalizes the insulting of religious sensibilities.

The law on religious sensibilities was approved in the wake of a protest in Moscow’s largest cathedral by a female punk rock group, Pussy Riot. State-run television said the group’s “demonic” protest was funded by “some Americans.” Russia’s newfound embrace of traditional values has prompted a rise in Orthodox vigilantism. Extreme groups such as the Union of Orthodox Banner Bearers, an ultraconservative faction who adopted a slogan “Orthodoxy or Death,” are gaining prominence.

It was not that long ago that the United States was accusing Russia for being a “godless nation.” On March 8, 1983, Ronald Reagan said this about Russia to an audience of evangelicals:

Yes, let us pray for the salvation of all of those who live in that totalitarian darkness–pray they will discover the joy of knowing God. But until they do, let us be aware that while they preach the supremacy of the state, declare its omnipotence over individual man, and predict its eventual domination of all peoples on the Earth, they are the focus of evil in the modern world.

History supports the 40th President of the United States’ remarks. According to a 1995 Russian presidential committee report, Soviet authorities executed 200,000 clergy and believers from 1917 to 1937, many of them crucified, scalped, and otherwise tortured. Thousands of churches were destroyed, and those that survived were turned into warehouses, garages, or museums of atheism.

Moreover, another 500,000 religious figures were persecuted and 40,000 churches destroyed in the period from 1922 to 1980, the report said. Half the country’s mosques and more than half the synagogues were also destroyed. “Clergymen were crucified on churches’ holy gates, shot, scalped [and] strangled,” said Alexander Yakovlev, head of the Commission for the Rehabilitation of the Victims of Political Repression. “I was especially shocked by accounts of priests turned into columns of ice in winter,” Yakovlev said. “It was total cruelty.”

And Mr. Putin/Russia would be completely correct.  God help us+

Russia must be consecrated to the Immaculate Heart if the world is to have peace.  Clearly Russia would welcome this.

Pray for the consecration of Russia to the Immaculate Heart of Mary.

Our Lady of Fatima, pray for Russia and for us all.