Traditionalists to the rescue ( sigh)

Traditionalists to the rescue 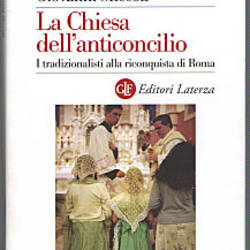 What is the relationship between Christianity and history?  Has the Second Vatican Council really changed its opinion on the modern world? And Tradition, which the Church calls «immutable», how does it fit in with a changing world? Indeed, with a world that is always changing? These are the questions to be asked when reading this reconstruction of the relations between the Vatican and Lefebvrists, that is, those traditionalists who do not accept the Council (especially the parts relating to ecumenism and interreligious dialogue) and as far as liturgy is concerned, they want the Mass in Latin as an expression of the sole, immutable and true rite. Why so much attention for a phenomenon which all in all is quite marginal?

The Fraternity founded by Lefebvre is the spearhead of the varied anti-Council movement, which more or less publicly and with varying intensity, has been present in the Church since the year in which the Council opened.   In the last fifty years, Giovanni Miccoli has rebuilt relations between the two contenders and examines the attitude assumed towards the Fraternity by the popes after the Council, in order to understand in which direction the papacy and the Curia intended directing the Catholic Church each time. The basic question is in the relationship with the modern world. In other words: Paul VI was acutely aware of the historicity of Christianity: his successors perhaps a little less. The progressive forces connected with history-related efforts have been curbed, convicted, regimented; Tradition – in other words the mass in Latin – has been justified but only in half («only» the Mass, in fact)  stressing that in Latin or after the second Council, are two expressions of the same ritual (as written by Benedict XVI in the document authorizing its use).  In this manner the relationship with history has remained crippled, incomplete.  The Council, says the Pope today, is in continuity with the Church and there is no break because Tradition has a «live nature» (as John Paul II).  However, behind the beautiful phrases, reality shows all the problems: precisely the historical recognition and therefore also the historicization of the liturgy and rites, to have the courage to propose new solutions to today’s problems.  Rejecting any claim to stop time.

«The theme of the speech does not go beyond the plot between Lefebvre’s disputes with the council (and its consequences) and the answers given from time to time by the Roman authorities.  The complex reality of the ecclesial structure remains virtually ignored and in the background.  It is a strong limit. The absolute centrality of the papacy, which corresponds to the Roman claims and has been undertaken when setting up my work, no longer corresponds to a feeling and a common way of being in the Catholic universe.  Not without reason word has it that teachings which, given the many gaps that open and to the many problems that break out, does not know how to avoid repeating and reproposing himself.  This book contains some examples. The fact remains that the loss of authority, I would say «grip» of the Roman magisterium is, in the curia’s perspective, the major cause for the current crisis.  It is no coincidence that centrality is a key component of the comparison between Rome and the Fraternity. Here, in the first place, is the justification for  the limited horizon that characterizes my research».(from the Author’s Introduction)