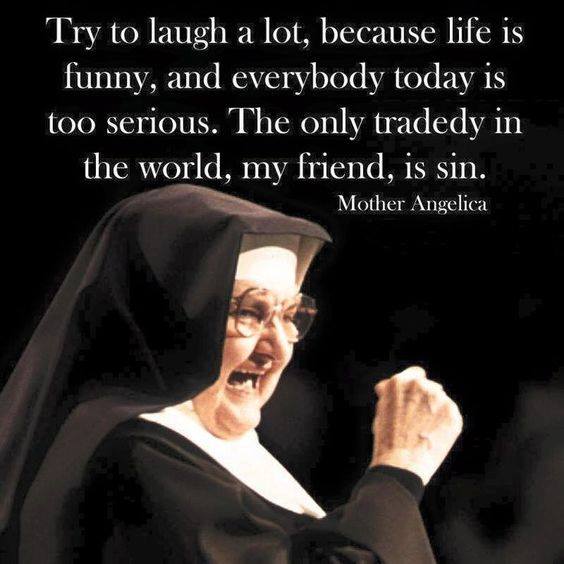 A vulture boards an airplane, carrying two dead raccoons. The
flight attendant looks at him and says, "I'm sorry, sir, only one
carrion allowed per passenger."

Two Eskimos sitting in a kayak were chilly, so they lit a fire
in the craft. Unsurprisingly it immediately sank, proving once again
that you can't have your kayak and heat it too.

Two hydrogen atoms meet. One says "I've lost my electron." The
other says "Are you sure?" The first replies "Yes, I'm positive."

Did you hear about the Buddhist who refused Novocain during a
root canal? His goal: transcend dental medication.

A group of chess enthusiasts checked into a hotel and were
standing in the lobby discussing their recent tournament victories. After about
an hour, the manager came out of the office and asked them to disperse. "But
why?", they asked, as they moved off. "Because," he said," I can't stand
chess-nuts boasting in an open foyer."

Mahatma Gandhi, as you know, walked barefoot most of the time,
which produced an impressive set of calluses on his feet. He also ate very
little, which made him rather frail and, with his odd diet, he Suffered from bad
breath. This made him (Oh man -- this is so bad, it's good) a super calloused
fragile mystic hexed by halitosis.

Two men were sitting next to each other at a bar.  After a while, one guy looks at the other and says, “I can’t help but think, from listening to you, that you’re from Ireland.”

The other guy responds proudly, “Yes, that I am.”

The first guy says, “So am I!  And where about from Ireland might you be?”

The other guy answers, “I’m from Dublin, I am.”

“Sure and begorra!  And what street did you live on in Dublin?”

The other guy says, “A lovely little area it was.  I lived on McCleary Street in the old central part of the town.”

The first guy says, “Faith and it’s a small world!  So did I!  So did I!  And to what school would you have been going?”

The other guy answers, “Well now, I went to St. Mary’s, of course.”

The first guy gets really excited and says, “And so did I!  Tell me, what year did you graduate?”

The first guy exclaims, “The Good Lord must be smiling down upon us!  I can hardly believe our good luck at winding up in the same bar tonight!  Can you believe it?  I graduated from St. Mary’s in 1964 my own self!”

About this time, John walks into the bar, sits down and orders a beer.  Brian the bartender walks over to John, shaking his head and mutters, “It’s going to be a long night tonight.”

John asks, “Why do you say that, Brian?”

Here is one more.  In my former life I trained as an accountant....and have been married to an engineer for 27 years.  :-)

Gallagher opened the morning newspaper and was dumbfounded to read in the obituary column that he had died. He quickly phoned his best friend, Finney.

"Did you see the paper?" asked Gallagher. "They say I died!!"

"Yes, I saw it!" replied Finney. "Now can ye tell me where are you're callin' from?"

Ok, one more joke, this time from Ukraine:

We needed a bridge. This bridge was built.

Now, we need a guard for the bridge, so a guard was hired.

Now we need a manger to manage the guard. A manager was hired.

Now we need a house for the manager, so a house was built.

Now we need maid service for the house, so maids were hired.

Now we need a chef to cook for the manager and business related activities, so a chef was hired.

As time went on, it came to reality that guarding the bridge was becoming too expensive to maintain.

Preparing for the Birth:
1st baby: You practice your breathing religiously.
2nd baby: You don't bother because you remember that last time, breathing didn't do a thing.
3rd baby: You ask for an epidural in your eighth month.

The Layette:
1st baby: You pre-wash newborn's clothes, color-coordinate them, and fold them neatly in the baby's little bureau.
2nd baby: You check to make sure that the clothes are clean and discard only the ones with the darkest stains.
3rd baby: Boys can wear pink, can't they?

Worries:
1st baby: At the first sign of distress--a whimper, a frown--you pick up the baby.
2nd baby: You pick the baby up when her wails threaten to wake your firstborn.
3rd baby: You teach your three-year-old how to rewind the mechanical swing.

Going Out:
1st baby: The first time you leave your baby with a sitter, you call home five times.
2nd baby: Just before you walk out the door, you remember to leave a number where you can be reached.
3rd baby: You leave instructions for the sitter to call only if she sees blood.

Typos and bloopers from church newsletters:

The Pope goes to New York. He is picked up at the airport by a limousine. He looks at the beautiful car and says to the driver, "You know, I hardly ever get to drive. Would you please let me?"

The driver is understandably hesistant and says, "I'm sorry, but I don't think I'm supposed to do that."

But the Pope persists, "Please?" The driver finally lets up. "Oh, all right, I can't really say no to the Pope."

So the Pope takes the wheel, and boy, is he a speed demon! He hits the gas and goes around 100 mph in a 45 zone. A policeman notices and pulls him over.

Cop: Chief, I have a problem.

Chief: What sort of problem?

Cop: Well, you see, I pulled over this guy for driving way over the speed limit but it's someone really important.

Cop: No, no, much more important than that.

Cop: Wayyyyyy more important than that.

Chief: Who's more important than the president?

Cop: I don't know, but he's got the Pope driving for him!