The (gray) sky over Berlin

The (gray) sky over Berlin 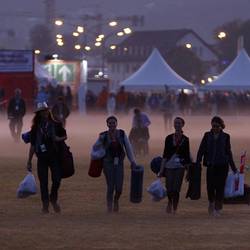 According to recent research, almost one million people would be willing to abandon Catholic and Protestant Churches

In Germany one million people want to leave the Catholic or Protestant Church.  If you add those who are thinking about it but have not yet made a final decision, the number increases to more than 5.5 million people.  This is the result of a study conducted by the Sinus Institute in Heidelberg and published first hand on the supplement “Christ und Welt” of the German weekly Die Zeit.

In practice 2.4% of the total number of Catholics and Protestants over 14 years  of age said they would turn their backs on their Church.  The apostasy seems to affect the Protestant Church to a greater extent than the Catholic Church;  among Protestants, the percentage of those who are determined to leave their Church is 3.2%, while among Catholics it is exactly half (1. 6%).  The trend is the same when considering those who are reflecting on leaving their church:  12.1% of total Protestants and 9.9% of Catholics.  «For Christian churches, Germany has become a mission territory», writes the director of the Sinus Institute, Bodo Flaig.

In fact, the figures seem to confirm a progressive turn away from the main German denominations.  Since the reunification of Germany (1990) to 2008 the Protestant Church has lost 17% of its faithful, the Catholic Church 11%, recalls Flaig.  At the same time, the number of those who belong to another religion or who do not have any has increased:  for example, 65-80% of the inhabitants of the Eastern states declare themselves non-denominational, those who until 1990 formed East Germany.

According to the study of the Sinus Institute, conducted in October 2011 by interviewing 2,000 people, on the whole more than half of the Germans (59%) declared to be “religious”.   33% say they feel attached to their church and 28% actively involved in church life through, for example, volunteer work.  21% goes to Mass regularly and 10% pray daily.  Furthermore, 40% believe it is important to give children a religious education, while 23% declared to have “a lot” or
“sufficient” interest for religious issues.

A socio-economic analysis conducted by the Institute reveals a certain distance from the official Church, even among the Germans closer to Christian denominations.  In none of the various "milieu" (i.e. socio-economic subgroups) in which Sinus divides German society, is the Church now  able have a concrete majority of people.