Rorate Caeli: It is More Likely Than Not That Francis is a Formal Heretic

Rorate Caeli: It is More Likely Than Not That Francis is a Formal Heretic 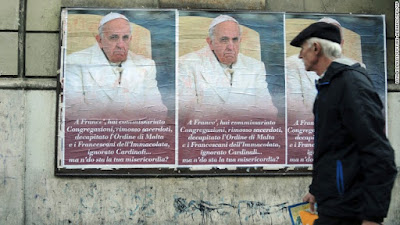 All sorts of rumors are now swirling about current events in the Church:

And these come against the background of significant public events and incidents:

A friend reminded me of this motto:

Motion accelerates when the end is near

But what is the "end" in this case?
The unprecedented (in modern times) suppression of four (or more) cardinals and thus a tightening of the grip of the Church of Mercy?
Open schism?
Or is it that the "end" will include the removal of a pope?
As unthinkable as the last possibility may seem, more and more people, many inside the Church hierarchy and bureaucracy, are now privately talking about it. Even if it is mere wishful thinking, this has enormous significance.
Today, Rorate Caeli, one of the leading traditionalist Catholic websites, published a long essay by Canadian-born philosopher John R.T. Lamont, addressing certain questions surrounding the meaning of "formal correction." While the positions taken in he article were not explicitly endorsed by the site, the post was not preceded by any disclaimers either, unlike other "controversial" articles they have published.

Among other things, Lamont claims:

In the light of the fact that Pope Francis has openly endorsed heretical understandings of Amoris laetitia in his letter to the bishops of the Buenos Aires region of Sept. 5th 2016, it is more likely than not that he is in fact a formal heretic.

Why then have so few cardinals and bishops publicly lined up with the four "dubia cardinals" on this? Lamont argues that much of the reason stems from an absolutist understanding of "obedience," with roots in the philosophy of St. Ignatius Loyola and other 16th and 17th century Jesuits. But this understanding is erroneous and dangerous:

The question of how anyone, even a cardinal, can correct the Pope is an important one. It is a basic principle of the divinely established constitution of the Church that the Pope judges all other Catholics on earth and is judged by none of them. But this constitution does not establish the Pope as an autocrat with tyrannical authority, who is answerable to no-one. The Pope's authority is a legal one, and as with all legal authority it involves duties to his subjects as well as rights over them. The duty to confess the Catholic faith is a fundamental duty of the papal office. His subjects may thus formally request and even require him to carry out this duty. The right to make such a formal request belongs to any Catholic, but the cardinals, whose office is to advise the Pope, have a strict duty as well as a right to make this request. The cardinals who have failed to do this are guilty of a grave dereliction of duty. This failure is a catastrophe that threatens to lead to the disintegration of most of the Church.

It should be noted that the anonymous Rorate author who introduces the piece, strongly rejects the truth of the rumor that the Pope has already been formally corrected. However, he does not explain why he believes this.

Why is it so difficult for people to see what is right in front of them?

And to accept it?

The "END" is the great Apostasy!

So many things run through my head when I read things like this.

I ask myself the same question and the only answer I can conclude is the world has gone mad.  People have thrown God away and subsequently have lost their ever lovin minds.  Normal people in constant contact with those of the world who have lost their marbles seem to have that madness rub off on them to one degree or another.

Personally I am keenly aware that this is going to be the year of reckoning.  We are standing on the threshold of civil war, and WWIII simultaneously.

For the first time I'm really worried looking face to face at the reality that this chastisement is imminent.

Why is it so difficult for people to see what is right in front of them?

And to accept it?

The "END" is the great Apostasy!

So many things run through my head when I read things like this.

AND, it is all prophesy in scripture, and by La Salette ....and on infinitum....

So, brace yourself, we are in for a huge chastisement...

Can or will OUR LADY  hold back the wrath of God....

LORD HAVE MERCY....STAY IN HIS GRACE AND PRAY 15 MYSTERIES EVERYDAY...BE PREPARED.