MONS. ZENDEJAS: SERMON OF HOLY THURSDAY ON THE OCCASION OF THE CONSECRATION OF SAINTS OILS IN AVRILLÉ, FRANCE ~ Non Possumus

MONS. ZENDEJAS: SERMON OF HOLY THURSDAY ON THE OCCASION OF THE CONS... 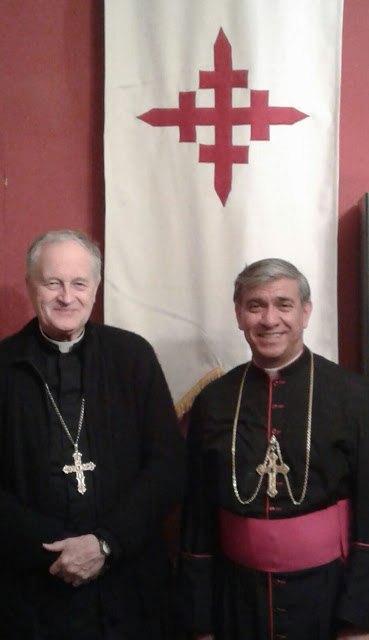 As Catholics, we believe there are four Notes in the Catholic Church: One, HOLY, Catholic and Apostolic. It is necessary to remember that the Catholic Church has the power to make Saints. This is the Holiness Note. Absolutely, God sends his grace from heaven because He is the source of holiness. For this reason Our Lord has instituted seven sacraments in order to be like a common path of sanctification, prefigured under the Mosaic Law and perfected under the Law of the Gospel by the true and only Messiah - Our Lord Jesus Christ.

A sacrament is a visible sign instituted by Jesus Christ to give grace, which we need for the eternal salvation of our soul. Taking into account human nature, Our Lord established an invisible grace, for example the son of God by adoption, to a visible sign - like water - when it is used to baptize. In other words, man needs to perceive an outside signal so that he can realize and so I can communicate spiritual realities. In such a way that the sacraments are symbols in a way, that nevertheless they realize what they mean.

Catholic tradition has conveyed that there are three essential elements in a sacrament: material, form, and intention. Certainly, there is an immemorial custom of using OIL in the administration of some of the sacraments; For example, the use of Holy Chrism (which is the mixture between Olive Oil and Balsam) is essential for the administration of the sacrament of Confirmation. Thus, concerning the administration of the sacraments to preserve their substance, traditional teaching including the common doctrine of the Church and the theologians, have taught those elements of materiality, form and intention, as well as religiously expressed in the prayers and gestures through the Roman Ritual or the Eastern Liturgical Rites. IN TRUTH, AFTER THE SECOND VATICAN COUNCIL THESE RITES HAVE BEEN MODIFIED. Why?

Here are some important data in the change of the Rites:

In 1968 the New Rite for Priestly Ordination was approved

In 1971 the New Confirmation Rite

In 1972 the New Rite of Extreme Unction

Thus, in 1970 a new matter for the Holy Oils was instituted, not only has the use of a different kind of oil been forced, but the fact that the oils are blessed has also been accepted, instead of being consecrated.

The New Rites - in general - relativize the essential intention in the administration of the Sacraments because they undermine the truths of the Catholic Faith. For example, OLIVE OIL from apostolic times was considered as the only and proper matter. The Ritual for the consecration of Holy Oils, which we will use in a few minutes, expresses during the preface that olive oil was chosen from among other trees for the significance of the tree of peace and light - arbor pacis et lucis. It is said that Noah had received some leaves from the olive tree, as a sign of peace coming from God after the Flood, as well as Our Lord - praying in the Garden of Olives - he wanted to sanctify those olive trees in order to sanctify us when we offer ourselves to God, especially when a person gives himself to God for the priestly life or for religious life. In fact, for the purpose of validity in the administration of the Sacrament of Confirmation the Holy Chrism is essentially necessary to be obtained from olive oil mixed with Balsam.

Otherwise, on December 3, 1970, the Congregation of Rites authorized the use of other vegetable oils for the administration of Sacraments, approved by Pope Paul VI. Furthermore, it is read in the New Code of Canon Law (1983) in canon 847: "To administer the sacraments in which the Holy Oils should be used, the minister must use oil obtained from olives OR FROM OTHER PLANTS .... Consecrated or MADE TO BLESS for a Bishop. "

However, the Congregation of Rites did not give any reason to justify that something that it had always been considered as INVALID (another kind of oil), later it would be suddenly considered to be VALID and with an obligation to accept it. If Catholic Tradition has always refused to change the essential elements of the sacraments, it is because Jesus Christ has instituted them.

After Vatican II, many priests have been wrongly indoctrinated during the preparatory years of their formation, in such a way that they could deliberately be weak learning about Tradition, and very strong in modernism. The modified forms of the Novus Ordo concerning the sacraments, not only affects the belief of the priests but also affect the belief of the parishioners to preside over the celebrations of the Community, or interacting in social functions. Because of the constant defects and excesses, the new Rites of the sacraments are preaching a different way of believing.

It is for that reason that Monsignor Lefebvre wisely RESISTED these innovations in order to preserve our Faith and the grace of God, so that the four Notes of the Church could be preserved, in particular that Note of Holiness, for the Greatest Glory of God and the eternal salvation of many souls.

Let us thank Our Lord, during this ceremony, for the institution of the sacraments of Holy Thursday - the Holy Eucharist and the Priestly Order because He has also wanted to consecrate the ministers for the sacraments. That is why He has consecrated the first bishops to go and preach the Gospel to the whole world with their Traditions. Therefore, we should pray for the fidelity of the Bishop traditional, although there are some of them who want to play the treacherous role of Judas Iscariot.

To conclude, more than ever we thank Our Lady of Paris for having sent the French Prelate, Monsignor Lefebvre, to preserve our Catholic Episcopate and the Catholic Priesthood by using the Traditional Rite of the Sacraments, particularly that of the consecration of the Holy Oils for the validity of them. Just as the statue of Our Lady of Paris remained intact, and despite the fire last Monday, Monsignor Lefebvre's firm stance on the Tradition will remain safe despite the consuming fire of the destructive innovations of Vatican II.

Therefore, we thank once again Our Lady of Paris for remaining in the Traditional High Altar in the Cathedral after the burning fire last Monday, whether it was caused by an accident or by an incident ... God knows. However, what we really do know is that in spite of such fire and smoke, Our Lady wanted to remain at the foot of the Cross of her beloved Son, decorated by the crowns of royalty in Paris, as A TESTIMONY that the doors of the hell will not prevail against the Mystical Body of Christ. The Catholic Church will not be destroyed, the Cathedral of Notre Dame de Paris will be restored. Absolutely, the Mother of God encourages us to preserve the Deposit of Faith by transmitting the mystery of Redemption, despite the diabolical confusion of Vatican II. The Cross of Our Lord Jesus Christ is always imperative because He is true God, true Man, and TRUE KING!

MONS. ZENDEJAS: SERMON OF HOLY THURSDAY ON THE OCCASION OF THE CONS...

Holy Mother of God pray for us.

I wonder if we could request conditional baptism and marriages sacraments for us converts from Novus Ordoism....

Our Lady of Paris, pray for us.

I believe, Kate, that the grace restored to us thru our conversion into the true faith encompasses and covers everything we are and we have, all things we say, think, and do.

I wonder if we could request conditional baptism and marriages sacraments for us converts from Novus Ordoism....

It’s been a long time ...but I think you might be wrong Flavia, I was conditionally re-confirmed by the SSPX because of doubts about the oils used...  surely there is more doubt about the intention to do the thing that the Church has always done I n terms of each sacrament ?

It seems that the rite of consecrations for bishops changed in 1968 too: