Exile to Malta for Cardinal Burke

Exile to Malta for Cardinal Burke

As the impeccable prefect of the supreme tribunal of the apostolic signatura, he is on the verge of being demoted to the purely honorary role of “patron” of an order of knighthood. At the behest of Pope Francis
by Sandro Magister (Chiesa)

VATICAN CITY, September 17, 2014 – The “revolution” of Pope Francis in ecclesiastical governance is not losing its driving thrust. And so, as happens in every self-respecting revolution, the heads continue to roll for churchmen seen as deserving this metaphorical guillotine.

In his first months as bishop of Rome, pope Bergoglio immediately provided for the transfer to lower-ranking positions of three prominent curial figures: Cardinal Mauro Piacenza, Archbishop Guido Pozzo, and Bishop Giuseppe Sciacca, considered for their theological and liturgical sensibilities among the most “Ratzingerian” of the Roman curia.

Another whose fate appears to be sealed is the Spanish archbishop of Opus Dei Celso Morga Iruzubieta, secretary of the congregation for the clergy, destined to leave Rome for an Iberian diocese not of the first rank.

But now an even more eminent decapitation seems to be on the way.

The next victim would in fact be the United States cardinal Raymond Leo Burke, who from being prefect of the supreme tribunal of the apostolic signatura would not be promoted - as some are fantasizing in the blogosphere - to the difficult but prestigious see of Chicago, but rather demoted to the pompous - but ecclesiastically very modest - title of “cardinal patron” of the Sovereign Military Order of Malta, replacing the current head, Paolo Sardi, who recently turned 80.

If confirmed, Burke’s exile would be even more drastic than the one inflicted on Cardinal Piacenza, who, transferred from the important congregation for the clergy to the marginal apostolic penitentiary, nevertheless remained in the leadership of a curial dicastery.

With the shakeup on the way, Burke would instead be completely removed from the curia and employed in a purely honorary position without any influence on the governance of the universal Church.

This would be a move that seems to have no precedent.

In the past, in fact, the title of “cardinalis patronus” of the knights of Malta, in existence since 1961, like the previous one of Grand Prior of Rome, has always been assigned to the highest ranking cardinals as an extra position in addition to the main one.

Two separate cases are those of Cardinal Giacomo Violardo, who succeeded the 89-year-old Giobbe as patron at the age of 71, two months after receiving the scarlet at the end of long service in the curia, and of the outgoing Sardi, appointed pro-patron in 2009 at the age of 75 and made cardinal in 2010 after having been for many years the head of the office that writes pontifical documents.

Above all, Sardi’s retirement would not be a compulsory act, since the age limit of 80 does not apply to positions outside of the curia. And in fact, with the exception of Paulo Giobbe, all of the aforementioned cardinal patrons went on to a better life “durante munere.”

Burke is 66 years old, and therefore still in his ecclesiastical prime. Ordained a priest by Paul VI in 1975, he worked at the apostolic signatura as an ordinary priest with John Paul II, who made him bishop of his native diocese of La Crosse, Wisconsin in 1993. It was again pope Karol Wojtyla who in 2003 promoted him as archbishop of the prestigious see, once cardinalate, of St. Louis, Missouri. Benedict XVI called him back to Rome in 2008, and made him a cardinal in 2010.

With a very devout personality, he is also recognized as having the rare virtue of never having struck any deals to obtain ecclesiastical promotions or benefices.

In the liturgical and theological camp, he is very close to the sensibilities of Joseph Ratzinger. He has celebrated a number of times according to the ancient rite, even donning the “cappa magna,” as do cardinals George Pell and Antonio Cañizares Llovera, without being punished for this by Pope Francis.

A great expert in canon law, and appointed to the apostolic signatura for this reason, he is not afraid to follow it to the most uncomfortable consequences. Like when, to the tune of articles of the Code - number 915 to be precise - he upheld the impossibility of giving communion to those politicians who stubbornly and publicly uphold the right to abortion, bringing the rebukes of two colleagues in the United States valued by Pope Francis, Sean Patrick O’Malley of Boston and Donald Wuerl of Washington.

Free in his judgments, he has been among the very few to make critical remarks on “Evangelii Gaudium,” pointing out that in his view it is orientational but not truly magisterial. And in view of the upcoming synod of bishops, he has repeatedly taken a stand against the ideas of Cardinal Walter Kasper - well known to be in the good graces of Pope Francis - in favor of communion for the divorced and remarried.

The dicastery headed by Burke, eminently technical, recently accepted an appeal from the Franciscan Sisters of the Immaculate against a provision issued for them by the congregation for religious. A courageous move on the part of Burke, situated within the context of the punitive action undertaken by the Vatican congregation against one of the most substantial realities of Catholic traditionalism, an action that Pope Francis endorsed by approving in specific form the congregation’s decision to prevent the Friars of the Immaculate from celebrating the Mass according to the “Tridentine” rite. It is only with this kind of pontifical approval, in fact, that a decree of the curia can overturn standing law, in this case the motu proprio of Benedict XVI “Summorum Pontificum.”

It is difficult to identify among these episodes the ones that may have have had the greatest influence on the fate of Cardinal Burke.

But it is easy to predict that his definitive downgrading will provoke both a tumultuous reaction within the traditionalist world, where Burke is seen as a hero, and a corresponding wave of jubilation in the opposite camp, where he is instead considered a bogeyman.

On the latter side it can be recalled that the “liberal” Catholic commentator Michael Sean Winters, in the “National Catholic Reporter” of November 26, 2013, had called for the head of Cardinal Burke as a member of the congregation for bishops, because of the nefarious influence, according to him, that he was exercising over episcopal appointments in the United States.

On December 16, in effect, Pope Francis humiliated Burke by crossing him off from among the members of the congregation. To the hosannas of “liberal” Catholicism, not only in the United States.

The pope certainly did not do so out of obedience to the wishes of the “National Catholic Reporter.”

But now he seems right at the point of giving the go-ahead for the second and more grave demotion of one of the most untarnished personalities the Vatican curia knows.
__________ 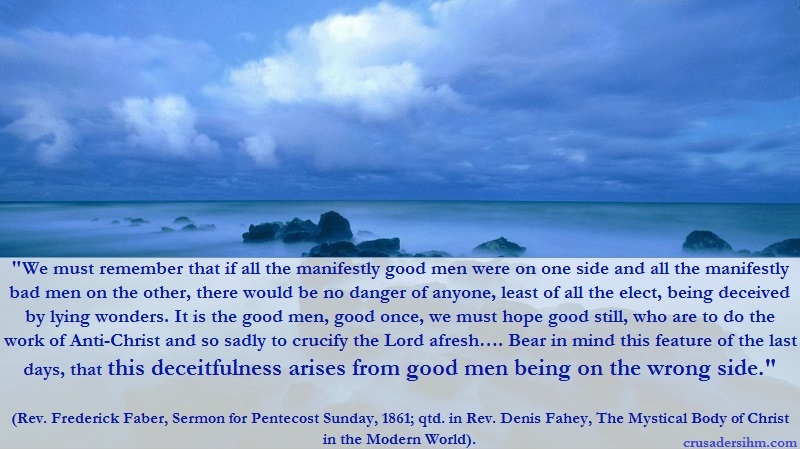 Certainly, Card. Burke will wear the Crown of  Christ,enduring such  persecuton from within the conciliar church..

No Cross, No Crown....May he remain steadfast in his stand for TRUTH.... Samuel said it so well.

Let us all continue in unity in prayer for our dear Cardinal Burke..