CATHOLIC TRIVIA OF THE SAINTS FOR CHILDREN

CATHOLIC TRIVIA OF THE SAINTS FOR CHILDREN 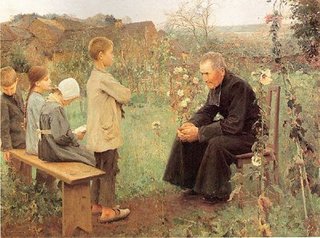 THE HELP/CLUES ARE NOW IN THIS SECTION, NOT YOUR PAGES

LAST SUNDAY'S ANSWER: The last question was a true or false about St. Alexius (Alexis).  It was false.  St. Alexis did live as a poor beggar, but he was not recognized by his parents and all who knew him.

RULES OF THE GAME

To get this started, here are the initial rules/guidelines for this activity.  A trivia question will be posted 3 times a week.  Each participant will get one point for each correct answer.   The participant with the most points will win that week.  In the event of a tie, a drawing will be held to determine the winner.   We ask that the losers pray 1 Our Father and 3 Hail Marys for the winner.

Any clarifications or additional rules will be posted soon  with the first question.   May God bless all who participate and may this thread lead to an increase in knowledge of and devotion to the many wonderful saints of our Catholic Faith.

Please check your pages for the information I post to help you answer the questions. The paragraph(s) with the answer(s) will be bold and/or italic. If you still can't figure it out, or can but need help to understand it, either find me in chat or post a message here in trivia. I want you to know/understand the information about the current saint before going on to the next.

Mary, Help of Christians, pray for us.

Saint Dominic, pray for us.

Saint Joan of Arc, pray for us.

Saint Michael the Archangel, defend us in battle.

This week let's pray an Our Father and 3 Hail Marys for all the children who participate in trivia.

The last question was about Saint Pantaleon.

The man St. Pantaleon cured during his trial was unable to use some of his muscles. So, our saint healed a paralytic. The next question is a true or false. All you need to say is true or false. Saint Hermolaus was also a doctor. As far as we know, that is false. It was St. Pantaleon who also was a doctor.

We will now take a break from the 14 holy helpers in order to learn about the saints who chose us during the 2013 Saint of the Year devotion. One of our children was chosen by the saint who chose me for 2012, St. Alexius whose feast day is July 17. His name is also spelled without the u or St. Alexis. After we do the other saints chosen for our children, we will do mine for 2013 and then return to the 14 holy helpers.

St. Alexius was born in Rome of noble parents in the fourth century. His mom and dad were well known for their virtue and almsgiving. Every day their servants prepared tables for the pilgrims, poor, and sick who might be coming for assistance. With a great feast, St. Alexius was married to a young lady from another noble family. But, inspired by God, on his wedding night he left Rome in order to find solitude and serve only God. When he arrived in Edessa, he gave away all that he had brought with him, and lived by the alms he received near our Lady's church there.

His parents sent his servants to look for him. When they came to Edessa, they did not recognize him, but gave him alms. Our saint said, "I thank You, Lord, who have called me and granted that I should receive for Your Name’s name’s sake an alms from my own slaves. Deign to fulfill in me the work You have begun.”

The Blessed Virgin confirmed the sanctity (holiness) of St. Alexius by using her image to speak to an official of the church. Seeking obscurity our saint left for Tarsus. However, the winds drove his ship to Rome. His parents, wife, and servants did not recognize him, but St. Alexius spent the rest of his life as an unknown beggar who received alms from his parents. He patiently underwent the mockery of his own servants.

At one of the Pope's Masses all heard a voice say, “Seek the man of God, he will pray for Rome, and the Lord will be favorable to it; he will die Friday.” They did not know that it was St. Alexius, whom God had ordered to write the story of his life. When the parchment containing this story was found in our dead saint's hand, the Holy Father read it aloud. All were filled with admiration for our saint. The house of his father, Euphemian, was lated changed into a church dedicated to St. Alexius. Those interested, may see a picture and read more here: http://magnificat.ca/cal/en/saints/alexis.html

This weeks question is true or false. If it is false, please rewrite it so it is true. Saint Alexis lived as a poor beggar who was recognized by his parents and all who knew him.

St . Alexis lived as a poor beggar who was unrecognized by his parents and all who knew him.

Let's pray an Our Father and 3 Hail Marys for Molly.  Honorable mention to Dom and Gabe.

The last question was a true or false about St. Alexius (Alexis).  It was false.  St. Alexis did live as a poor beggar, but he was not recognized by his parents and all who knew him.

Our next saint has is feast day on June 20.  He is Saint Silverius ,  a pope and martyr.  His father, who we know as Pope Hormisdas, was a married man before entering the priesthood.

Although our saint was just  a subdeacon when Pope Agapetus died, he was elected as the new pope in 536.    One of his problems was that Empress Theodora was a heretic who wanted to get rid of him.   She was assisted by a deacon named  Vigilius and an army general named Belisarius.  They were able to use a forged letter  -one the Pope hadn't really sent- from our saint to the King of the Goths, the enemy at the time to remove St. Silverius from office as a traitor and have Vigilius elected as the new pontiff.  Silverius was sent to Patara.

The bishop of Patara  discovering that Silverius was not guilty, went to Constantinople to speak with Emperor

Justinian.  Although the emperor ordered Silverius to be returned to Rome,  our saint was stopped before he could get there.  He was taken to the island of Palmeria where he lived until he died from hunger.  You may see a picture and read more at :http://magnificat.ca/cal/en/saints/saint_silverius.html

Here is the question.  One unusual thing about Saint Silverius is that he was just a _________ when he was chosen to be the pope.